Bananapocalypse: Externalities in the Making of Plantation Capitalism

ABSTRACT: Plantation regimes and transnational commodity trading confront a serious challenge in the 21st century. For every commodity that travels long-distance chains, there are multiple externalities that are hidden and unaccounted for—not by accident, but by design. Externalities are the social and environmental costs of production that are considered external because they are not accounted for in its calculus nor in the final price of a product, even as they contribute to value creation in uncompensated ways. Drawing on transnational ethnographic fieldwork between the southern Philippine region of Mindanao and Japan, this paper will argue that industry members depend not only on the externalities themselves, but also on the idea—indeed, the conceit—that externalities remain external, that they can permanently be pushed onto others “downstream” without those elements circling back to haunt them. Focusing on externalities such as rogue pesticide drift, rejected food waste, and soil pathogens, this paper will discuss how, when, and why the doubling back of externalities happens in the context of a powerful, but also desperate plantation industry operating within the increasingly constrained environmental conditions of this century. Ultimately, it seeks to raise a challenge: what if ethnographers wrote about powerful industries with the assumption that their acts of violence, force, and disregard come from a place of weakness rather than strength, and vulnerability rather than hegemony?

BIOGRAPHY: Alyssa Paredes is Assistant Professor of Anthropology at the University of Michigan, Ann Arbor. She is a socio-cultural anthropologist researching plantation agriculture, environmental activism, scientific convention, and transnational trade between the Philippines and Japan. Her work appears in Ethnos: Journal of Anthropology, the Journal of Political Ecology, and Food, Culture & Society, as well as in the edited collections The Promise of Multispecies Justice (Duke University Press, 2022) and Feral Atlas: The More-than-Human Anthropocene (Stanford University Press, 2020). She holds a PhD with distinction from Yale University. Before joining as assistant professor, she was LSA Postdoctoral Collegiate Fellow 2020-2022 also at the University of Michigan, Ann Arbor. 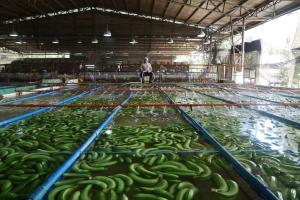 Bananapocalypse: Externalities in the Making of Plantation Capitalism